Distribution and phenology.-Oliveira decumbens is distributed along the northwest-southeast transect of a narrow area in the western and southern region of Iran and the northern regions of Iraq (Fig. 3; Appendix 1) at elevations between 150 and 1700 m. In Turkey, the species is only known from the Ceylanpınar region near the border with Syria. It grows in steppes and flowers in May and July. 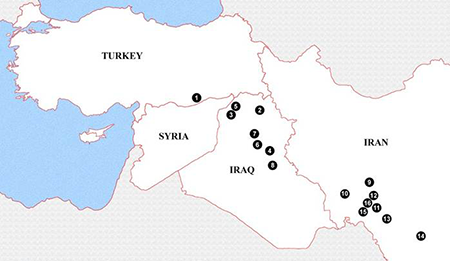 Fig. 3.  Map showing the distribution and locations of the studied specimens of Oliveria decumbens Vent. (numbers correspond to those given in Appendix 1).

Fruit anatomy and micromorphology.-The fruit of Oliveira decumbens is oblong-elliptic in the transverse section. Mericarps are homomorphic, nearly circular, and have five projecting ribs. The exocarp is a single layer and consists of rectangular-like cells near the distal ends of the marginal ribs. Their walls are slightly thickened and the outer walls are covered with a smooth cuticle layer and simple unicellular trichomes, which originate from the epidermal cells. The mesocarp is multilayered with thin-walled parenchymatous cells. They are irregularly shaped and polygonal. Vascular bundles are located under the ribs and are surrounded by mesocarp cells. The vittae are large and oblong-elliptic or nearly orbicular. They are lined with thin-walled epithelial cells. There is one vitta per vallecula and two commissural vittae. The endocarp is single layer and consists of thin-walled cells. Endosperm cells are irregular, polygonal in shape, and are filled with granular contents (Fig. 4). The fruit of O. decumbens is covered with dense, long, hirsute hairs that have a papillose surface (Fig. 6). 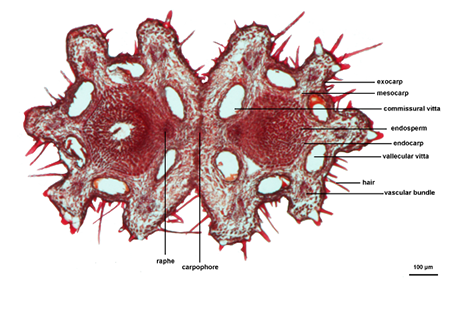 Palynology.-Pollen materials were taken from herbarium specimen. Light microscopy (LM) observations were carried out on acetolyzed pollen and prepared according to Erdtman (1952)Erdtman G. 1952. Pollen morphology and Plant taxonomy I. Angiosperms. Almqvist & Wikshell, Stockholm. . Measurements, based on 50 samples from one population, were taken with a Leica microscope. For SEM analyses, the acetolyzed pollen grains were mounted on stub and coated with gold, using a Polaron SC7620 sputter coater. Microphotographs were taken using an incorporated Zeiss LS-10 camera. The terminologies of Erdtman (1952)Erdtman G. 1952. Pollen morphology and Plant taxonomy I. Angiosperms. Almqvist & Wikshell, Stockholm. and Faegri & Iversen (1975) were used for the micromorphological features. The pollen grains of Oliveria decumbens are monad, isopolar, radially symmetric, and tricolporate (Fig. 5). The polar axis (P) ranges from 28.30 to 35.55 µm and the equatorial axis (E) ranges from 11.39 to 16.58 µm. The mean length of the polar axis (P) is 30.05 ± 2.30 μm, and the mean of the equatorial diameter (E) is 12.68 ± 1.74 μm. P/E averages 2.29 ± 0.16, making the pollen grain shape perprolate. In polar view, the pollen grains are nearly triangular with obtuse angles. In an equatorial view, the grains are narrowly oblong with slightly equatorial constriction and obtuse polar caps. The colpus extends nearly to the poles. The pore area is slightly protruding and located in the middle of colpus. The sculpturing pattern is striate or psilate at the polar area and irregularly rugulate at the equatorial area, but sometimes striate at the polar area and psilate-foveolate toward the polar area. The fruit of O. decumbens is covered with dense, long, hirsute hairs that have a papillose surface (Fig. 6). 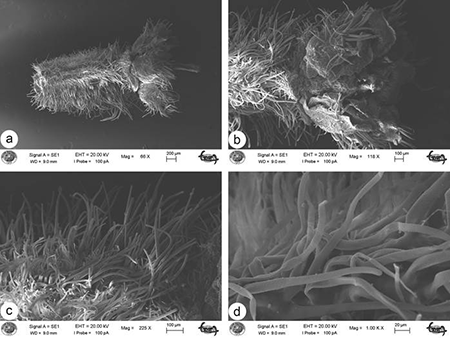 Comments.-Oliveria is very isolated from other members of Apiaceae and its morphological characteristic is rather distinctive and apparently does not closely resemble other genera in tribe Apieae. Oliveria is characterized by a much-branched and bright whitish stem; conspicuous and persistent sepals; densely hairy and divided bracts and bracteoles; dorsally hairy and white or pink petals; and slightly laterally compressed, densely hairy, and ovoid-oblong fruits.

One of main characteristics of Oliveria is its shiny white and glabrous stem. Similar stem structure is also seen in Ergocarpon C.C.Towns., Eryngium L., and Schumannia Kuntze. Amiri & al. (2011)Amiri H., Lari Yazdı H., Dosti B. & Samsamnia F. 2011. Essential oil composition and anatomical study of Oliveria decembens. Iranian Journal of Medicinal and Aromatic Plants 26: 513‒520. have studied the anatomical characteristics of the leaf and stem of Oliveria. Their studies have shown that the surface of leaves is covered by non-glandular hairs, while the cross section of the stems show secretory canals in the cortex region. In the present study, we examined the anatomy and morphology of the fruit. According to our findings, the fruit of O. decumbens is oblong, laterally compressed, and densely hirsute. The bracts of Oliveria are divided and resemble those of Ammi L., Artedia L., Cuminum L., Daucus L., Eremodaucus Bunge, Kalakia Alava, Lagoecia L., Ormosciadium Boiss., Scandix L., and Trachyspermum Link.

According to Erdtman (1952)Erdtman G. 1952. Pollen morphology and Plant taxonomy I. Angiosperms. Almqvist & Wikshell, Stockholm. , Umbelliferae species are stenopalynous. Observations by Perveen & Qaiser (2006)Perveen A, Qaiser M. 2006. Pollen Flora of Pakistan-XLVIII. Umbelliferae. Pakistan Journal of Botany 38: 1‒14. have indicated that the pollen grains of Apiaceae are usually radially symmetrical, isopolar, and prolate to perprolate and tricolporate (rarely 4-colporate). The tectal surface is commonly striate-rugulate, rugulate-striate, or simple striate. Our result confirms the stenopalynous characteristic of the family Apiaceae, and the palynological observations reveal that the pollen grains are perprolate in shape and irregularly rugulate in the equatorial area.

Our study provides a detailed account of the morphology, palynology, and micromorphology of Oliveria, increasing our botanical knowledge of a species that has been traditionally used since ancient times.

Appendix 1. Examined herbarium specimens. Superindex corresponds to the location labeled in the map in Figure 3